Our paper on the political landscape of the U.S. Twitterverse was recently published in Political Communication!

This is probably one of my favourite works so far for two main reasons: one, it was a super fun collaboration, and two, because this paper came out as a by-product. Back in 2019, we had scraped the Twitter following lists of thousands of U.S. based Twitter accounts for this bigger project that we had been working on (and one that we are still working on today), and one day, randomly decided that this would be a fun side-analysis to do.

I also love this paper because at various stages, its pre-print yielded a byline in The Washington Post, an interview at La Presse, and a somewhat viral Twitter thread.

Find it here or if you don’t have access to it, check out the pre-print. 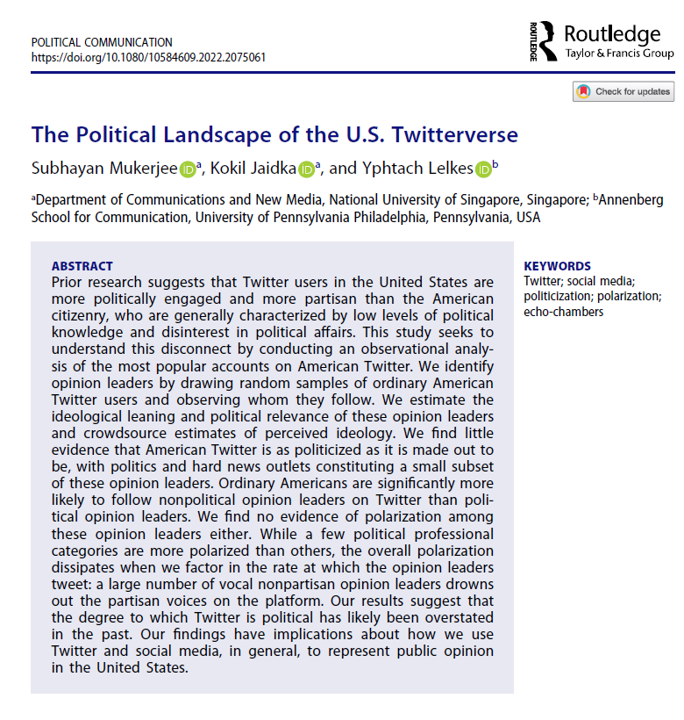 You May Also Enjoy

Publication in Journal of Communication!

I’m very excited to announce a new co-authored publication in the Journal of Communication. This work, that builds on our recent paper in Political Communication, offers a timely audit of Twitter’s shadowban algorithms between 2020-21, thereby shedding light on (one of) the most contentious issues around social media today. Read more

We have a new paper in Cyberpyschology, Behaviour, and Social Networking where we investigate the dynamics of audience engagement with public Facebook posts regarding COVID-19. Specifically, we look at the sentiment encoded in the posts, and the (sub)topic that the post is about, and how these may have influenced engagement levels during the roll out of the first dose of the vaccine in the United States. Read more

I was recently invited by the NUS School of Continuing Lifelong Education (SCALE) to deliver a masterclass on Data Storytelling for Business as part of the NUS Lifelong Learning Festival 2022. The focus of this edition of the festival was the Future of Work in Singapore. Read more

In January, I had announced that I am co-organizing the first edition of SICSS (Summer Institute in Computational Social Science) - Singapore. I am glad to report that the event was, by all measures, a success. This is the post-mortem report of the event, drafted by myself and my co-organizer and colleague, Prof. Renwen Zhang. Read more