In January, I had announced that I am co-organizing the first edition of SICSS (Summer Institute in Computational Social Science) - Singapore. I am glad to report that the event was, by all measures, a success. This is the post-mortem report of the event, drafted by myself and my co-organizer and colleague, Prof. Renwen Zhang.

SICSS-Singapore 2022 was the first SICSS partner location to be held not just in Singapore, but in the South East Asian region at large. Hosted at the National University of Singapore, and funded by the Centre of Trusted Internet and Community (CTIC) and the Faculty of Arts and Social Sciences (FASS), the core-organizing committee comprised three standing faculty members at the Department of Communications and New Media at NUS: Professor Jack Qiu, Assistant Professor Renwen Zhang, and Assistant Professor Subhayan Mukerjee.

Once Singapore was confirmed as a partner location in late 2021, we set up the website in December, and began outreach and publicity in January 2022.

Applicants could be master’s (by research) students or higher (including PhD students, postdocs, and early career faculty members within seven years of getting their PhDs). They were required to send their CV, a 500-word statement, one writing sample of not more than 35 pages, and (for students and postdocs) the name of one faculty advisor who is familiar with their work.

Since we were organizing SICSS for the first time, we set a modest target of receiving around 40 applications, with an aim to accept around 20. Moreover, while anyone around the world could apply, we made a conscious effort to prioritize local candidates (not just from Singapore, but the larger ASEAN region). The application deadline was set for February 2021 with an expectation to have SICSS-Singapore as a hybrid event. We later extended the deadline to March 1 to hit the required number of applicants. In the end, we received 41 applications from 8 countries. Publicity was done via the social media handles of the department, funders, and co-organizers. For future iterations, we plan to increase our target pool of applicants in order to make SICSS-Singapore more selective. One oversight on our part (that we plan to correct in the future) had been to ignore Chinese social media platforms, as those are widely used by many students, their friends and relatives in Singapore.

In parallel, we also worked on inviting guest speakers, with a special focus on showcasing practitioners of computational social science from in and around Singapore. We finalized six speakers (3 local, 3 international; 3 male, 3 female; 4 from academia, 2 from industry).

Since COVID-19 rules had been relaxed in Singapore, we pivoted to a fully in-person event (barring the international speakers who would be delivering their lectures via Zoom). We shortlisted and invited 22 of the 41 applicants - who we confirmed would be able to be physically present in Singapore. One oversight on our part was to not consider the visa requirements of international applicants: since all the participants had said that they would be in Singapore, we had assumed they would be able to enter Singapore without any difficulty. This was largely true, except for one participant (from Malaysia) who held a Yemeni passport, who emailed us the day before SICSS began that he needed a visa to enter Singapore. Even though we sent him a visa letter the next day, he was unable to make it to the event in person.

We opted to not on-board the participants to Slack as we got to know from other organizers (through Slack) that Slack onboarding hasn’t always been effective. Instead, we decided to create a Google Group for all discussions.

We had arranged for catering for every day of the event (snacks in the morning, lunch, and snacks in the evening). We surveyed the participants regarding their dietary requirements before placing the catering order.

We also hired three NUS undergraduate students to assist us in our day-to-day logistics for the event.

We had one conference room booked for all days for the guest lecture and video sessions, while there was ample space outside the conference room for both catering and group activities on all days. The conference room had large TV screens, and we procured the necessary AV equipment for the in-person guest speakers.

Monday began with an opening (virtual) guest lecture by Prof. Sandra Gonzalez-Bailon from the University of Pennsylvania. While the session itself went smoothly, the timing could have been better. Owing to the time difference between Philadelphia and Singapore, the talk was scheduled for 8:30 AM, which meant the participants had to arrive by 8 AM for logistical debriefing. For future iterations, we will try to have a local speaker deliver the first day’s lecture - preferably later in the day.

We had four other speakers over the following four days:

We tried to reach a balance between using the main SICSS curriculum (because we were organizing SICSS for the first time, and didn’t want to experiment too much) while adding some local, Asian/South East Asian flavor to the event. Our speaker line-up for week 1 reflected this balance. Thus, while most of our speakers have global training in CSS, some of them apply CSS to local/regional problems. We plan to increase the number of locally relevant speakers in future iterations of SICSS-Singapore.

We largely stuck to the main curriculum except on Friday, when we deviated by incorporating network analysis (to bring it more in line with the speaker’s topic and the expertise of the organizing committee. For future editions, we will play fewer of the pre-recorded videos and have the organizing team deliver similar content as “live” lectures to make the sessions more interactive. During the afternoon activities, the participants worked on the material provided by the main curriculum while the organizing team helped debug coding issues that the participants faced. Now that we have experience organizing a partner location, we plan to have locally-relevant problems for the students to work on in future editions as well and thereby, reduce dependency on the main curriculum.

One recurring problem that we encountered was the microphones running out of batteries during the in-person guest lectures. While they were all resolved eventually, this is something we should plan for in the future

We also arranged a special session about open science on Wednesday, as open science is an important area that CSS focuses upon and embraces. The panelists included our organizers, Subhayan and Renwen and a participant (Aimee Pink from A*Star) - all of whom had substantial prior experience in practising and advocating for open science. They discussed some of the best practices of open science and how they can help make CSS research more transparent, replicable, and meaningful. Participants actively participated in these discussions.

Given that we gave participants the flexibility of working on their group projects outside of the event venue, the attendance was generally lower than the first week, with fewer than 10 participants showing up at any time. This reduced the opportunities for participants to chat and learn from each other. Moving forward, we would probably distribute guest speakers over Week 2 and arrange some hand-on sessions to encourage participants to come to the event venue.

The highlight of the last day was the concluding talk by Dr. Kokil Jadka, followed by the group presentations from all participants. We had 5 groups in total and they covered a wide range of topics, including public opinion on food security in Singapore, identity politics, suicide prevention, network effects in quitting academia, and online customer engagement with AI chat bots. All these group projects were well-suited to the CSS methods they had learned over the past week, and the quality of presentations and study designs went far beyond our expectations. We asked them to submit formal project proposals for potential funding a week later. Four of the groups submitted well-thought-out, insightful proposals. Two of the groups were awarded a seed fund of $2,000 to execute their projects.

We ended SICSS with a social event, where we had beers and dinner and chatted with each about our research, life, hobbies, and potential collaborations.

Results from an anonymous post-event survey that was administered to the participants revealed very positive feedback. Most of them complimented the arrangement and structure of SICSS and said how it helped them get a solid foundation in CSS and put this knowledge into practice.

The summary of the survey results is as follows:

Crucially, there were two respondents who gave a 1/5 rating to their overall level of satisfaction. To the question “What are some ways you think in which SICSS-Singapore can improve?” one of them said “it was hard to have to watch multiple youtube videos every day even though we were meeting in person.” The other revealed extreme difficulties in working on the group project that they did not appreciate.

This allows us to segue into the difficulties we faced while coordinating the group projects. One group ended up not submitting a proposal due to disagreement among group members, and another group had some conflicts due to some members being absent from most discussions. Reflecting on this, we think these issues mainly stemmed from participants not being able to work together in person because some of the members had other obligations and prior commitments. As a result, they were not as engaged as we would have liked. In future iterations, we will arrange guest lectures and in-person hands-on sessions in the second week as well, to encourage participants to come to the venue and work together on their group projects. To that end, we will clarify in-person participation expectations during the application process and not accept participants who cannot commit to being physically present at the venue for the full two-week period.

Photos from the event 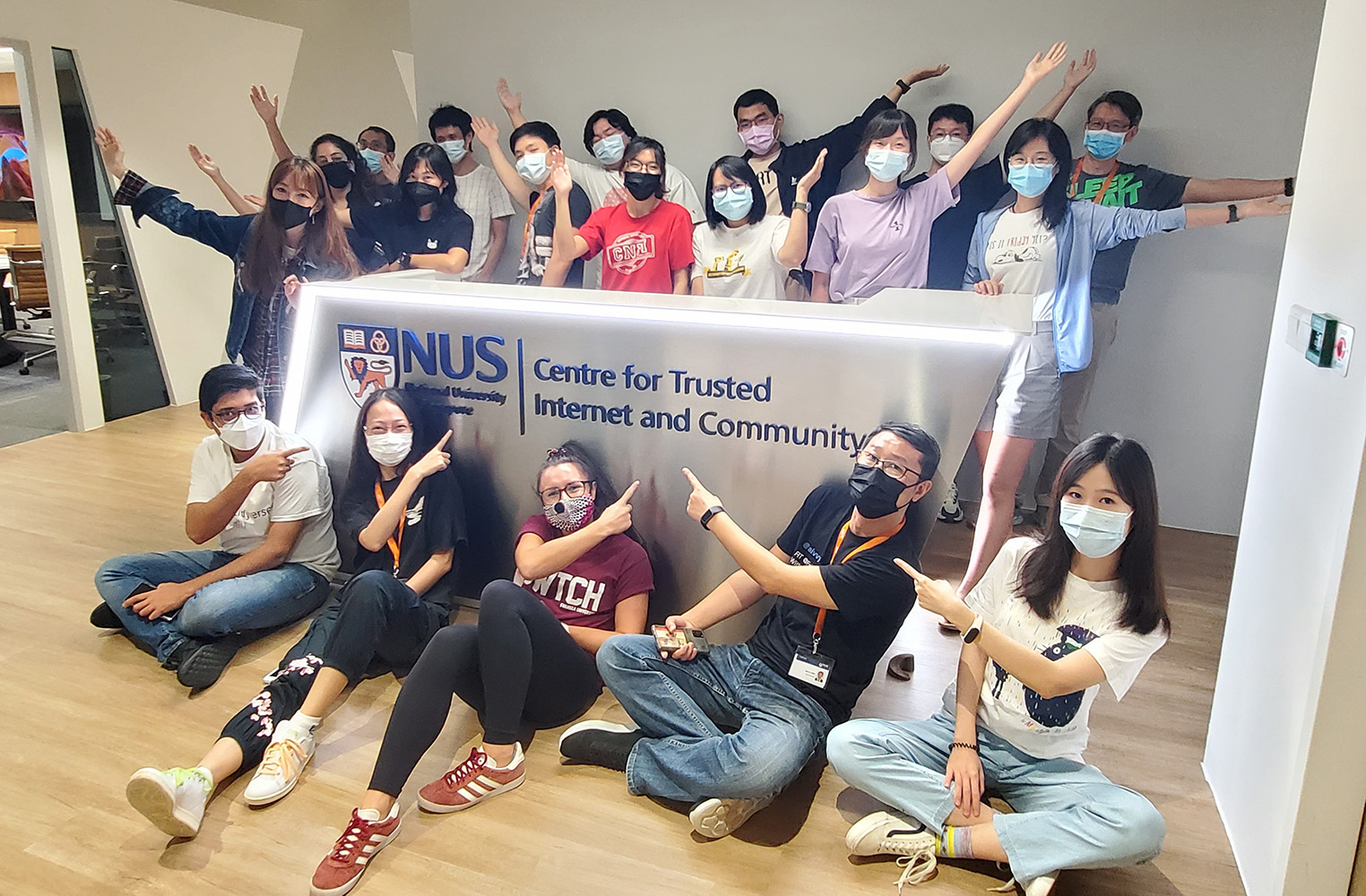 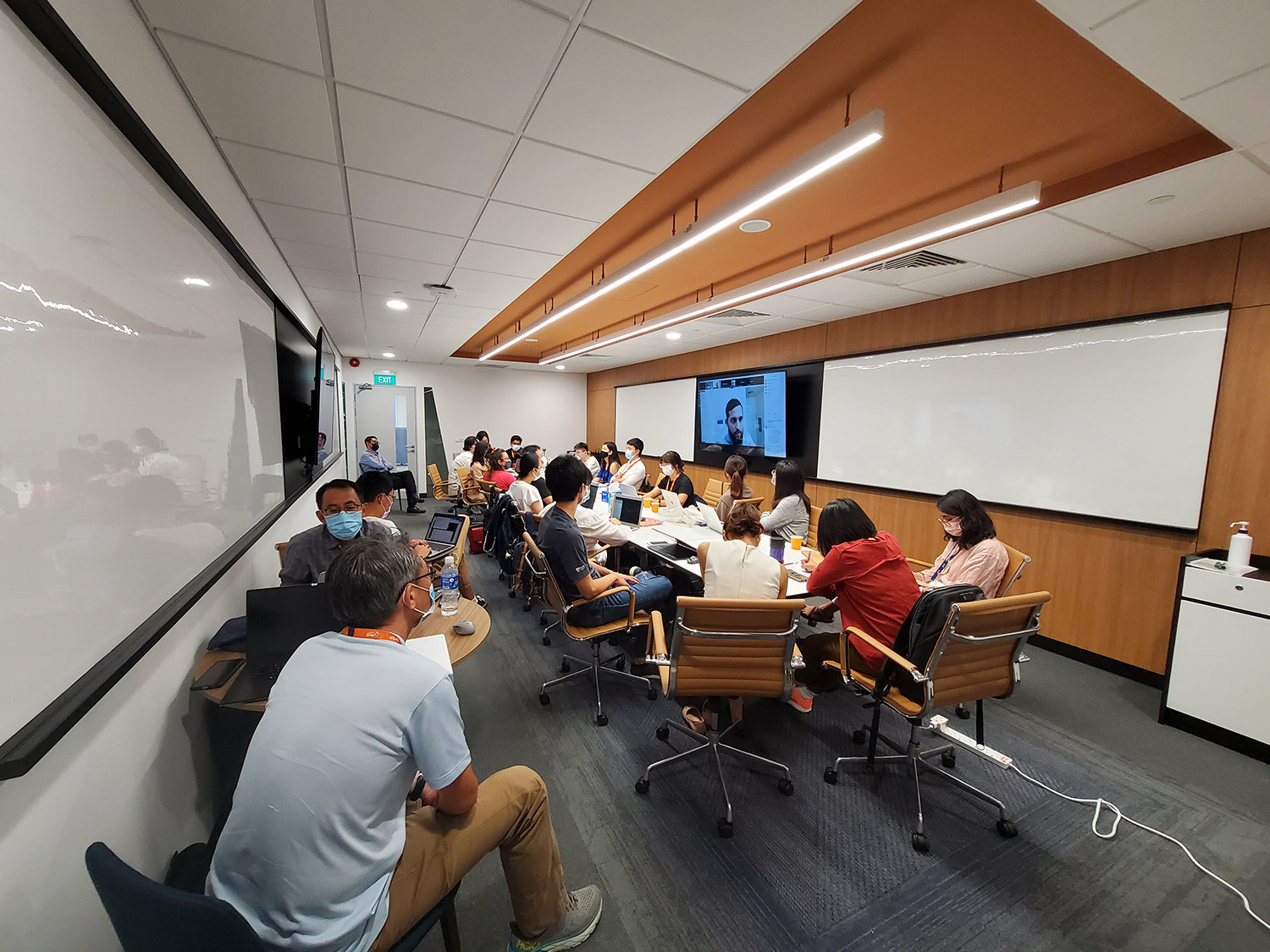 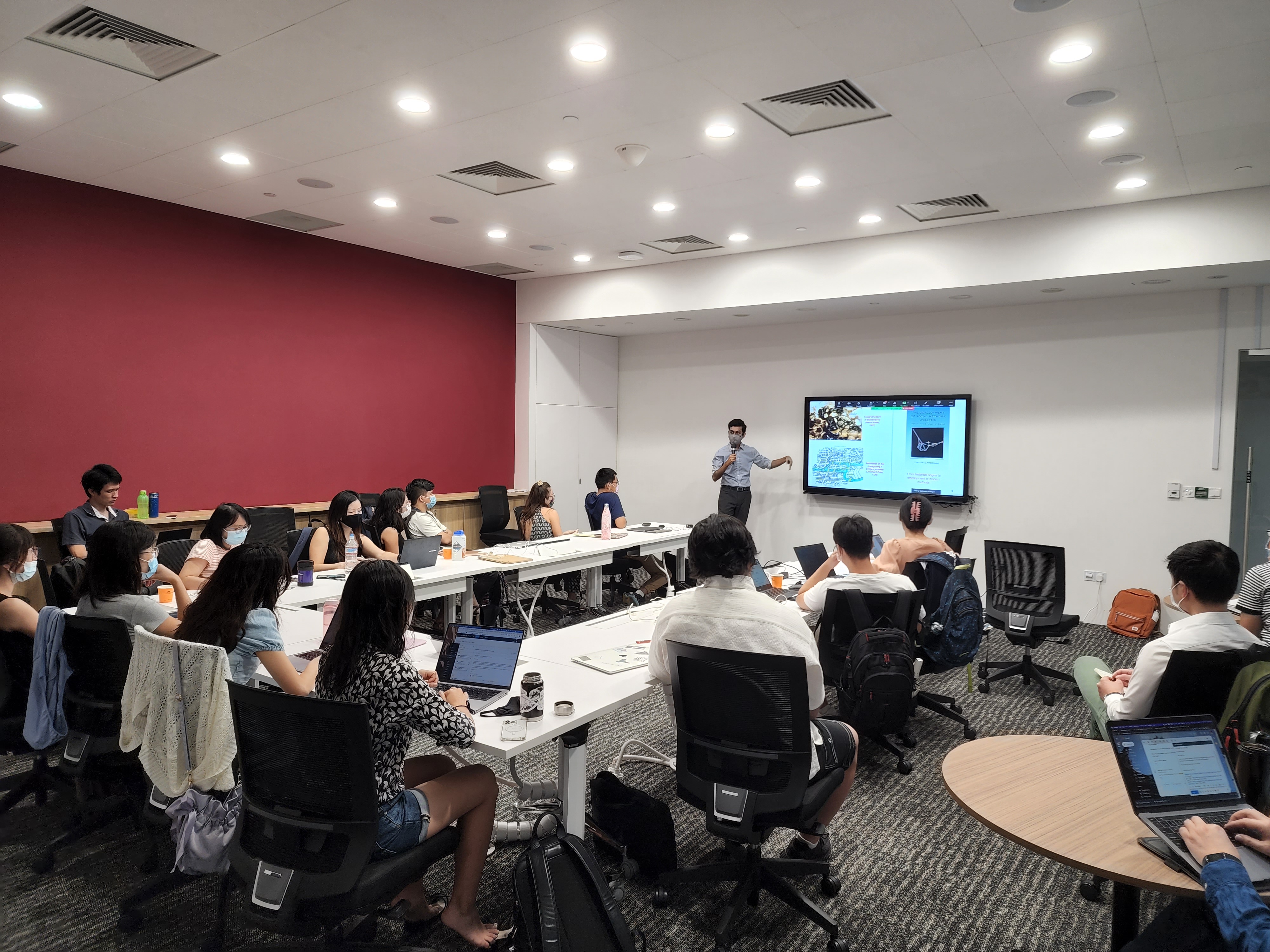 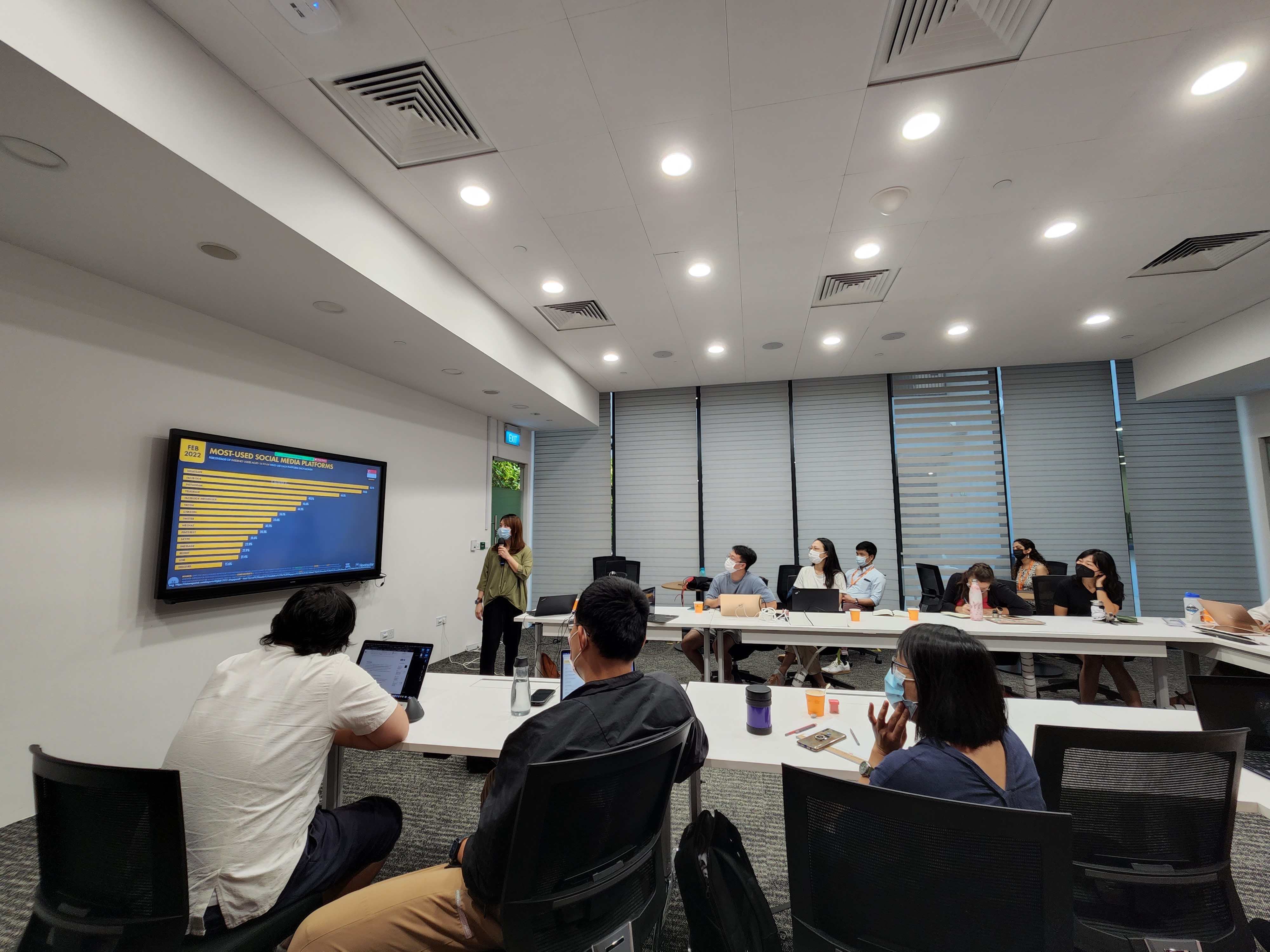 You May Also Enjoy

Publication in Journal of Communication!

I’m very excited to announce a new co-authored publication in the Journal of Communication. This work, that builds on our recent paper in Political Communication, offers a timely audit of Twitter’s shadowban algorithms between 2020-21, thereby shedding light on (one of) the most contentious issues around social media today. Read more

We have a new paper in Cyberpyschology, Behaviour, and Social Networking where we investigate the dynamics of audience engagement with public Facebook posts regarding COVID-19. Specifically, we look at the sentiment encoded in the posts, and the (sub)topic that the post is about, and how these may have influenced engagement levels during the roll out of the first dose of the vaccine in the United States. Read more

I was recently invited by the NUS School of Continuing Lifelong Education (SCALE) to deliver a masterclass on Data Storytelling for Business as part of the NUS Lifelong Learning Festival 2022. The focus of this edition of the festival was the Future of Work in Singapore. Read more

Our paper on the political landscape of the U.S. Twitterverse was recently published in Political Communication! Read more